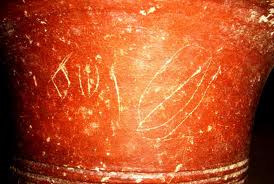 Detail of  Tamil script (Tamil Bhrami ) written in 790 B.C. – 490 B.C. which is written in the base of the pot  has 2 kg of paddy. The script read as Va-yi-ra  (Does it mean the stone  diamond as 350 × 283 - ... port-hole, ring-stand, a four-legged jar and pots at Porunthal; ...Vaira mani  or Vairava  Nel Mani? – one of the variety of traditional paddy) (Vairava samba  is a traditional Paddy variety in the zone and mentioned in folk lores and used  in last the century. 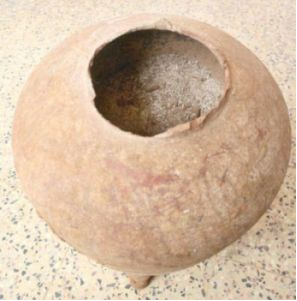 A four-legged jar contains  2kg of paddy found in one of the graves, which was written in Tamizhi script Va-yi-ra which triggers the debate 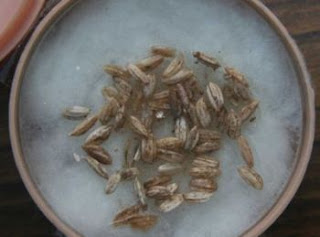 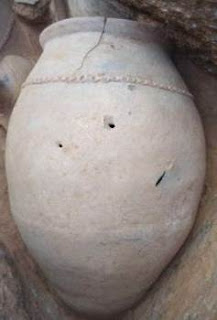 Sample of 2 kg  of cultivated paddy  identified as – Oryza sativa var.sativa   by an archieval  botanist found at the excavated  site which was officially  dated by Beta analysis Inc. (USA),  a world renowned lab by AMS technique. The analysis curve shows its period  between 790 B.C – 490 B.C.
.An urn with a chain-like design around it found at the burial site,  These are burial urns. The storage urns do not have the designs
Adichanallur. Tamil Nadu Excavations ensures Pre Sangam age Paddy civilization
Dr.Satyamurthy, an archaeologist called the Adichanallur (One of the oldest excavated site in India) burial site as  "the earliest site in Tamil Nadu" .Raw  Paddy husk and Paddy art on the Pot  was found that its history would go back to 1,000 B.C . 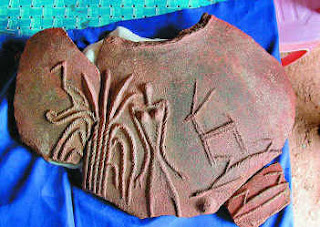 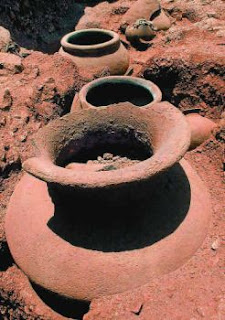 The c image shows the  potsherd with the motifs of a woman, a stalk of paddy, a crane, a deer and a crocodile. 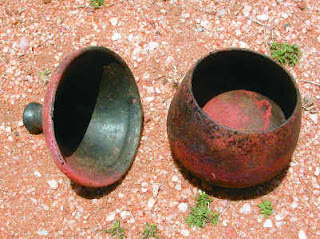 Paddy husk found: The urn and an earthen pot and its lid  in the foreground, found at Adichanallur
Living and continuing  Paddy culture of Tamil Nadu since pre Sangam Age ( 200B.C) - Endangering Paddy Irrigation Scientists 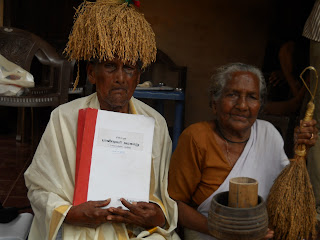 Traditional paddy Neerkattis - Traditional Paddy  water managers take care of the entire Paddy irrigation systems and maintenance of the water tanks and rivers in Tamil Nadu who are mostly a single community (The system is practiced  and taken care of  more than 10000 wet and dry tanks and river systems of Thamirabarani, Kaveri and Vaigai  which are supporting and main source of  paddy irrigation in the last century as per the British documents). The system is still existing and the Neerkattis are  in extinct condition.
Neerkattis are  holding  traditional Nel Mani Mudis and other measuring units 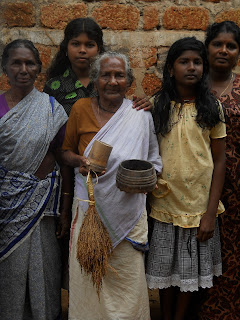 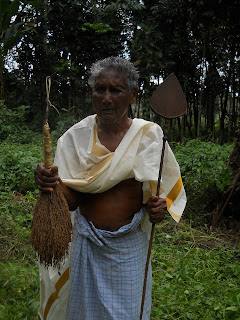 As per the Tamil tradition, Neerkattis  are engaged in both the agriculture and martial arts which reminds Sangam Heritage
Traditional  Paddy  measuring instruments of Tamils 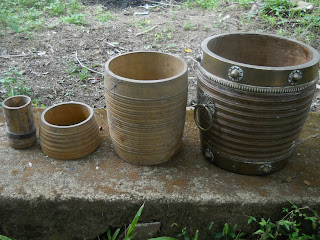 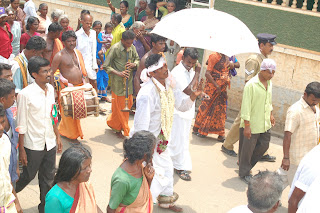 Note: White umbrella is a symbol and a representation of Rain God, Indra
Festival for Ploughing 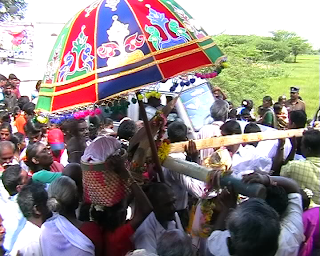 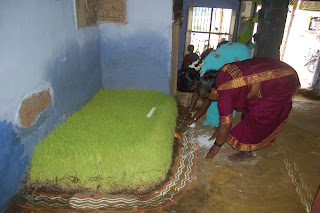 Women worshipping Indoor Paddy nursery (Dabog) with Paddy songs.  It is believed that Goddess Patchai Nayagi, goes along with transplanting women to the farm and does the first plantation of paddy along with the entire specialized farming community 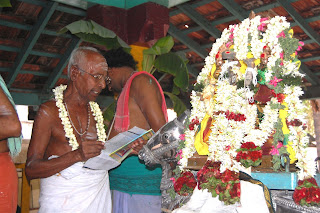 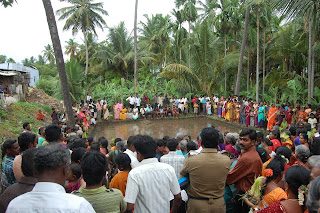 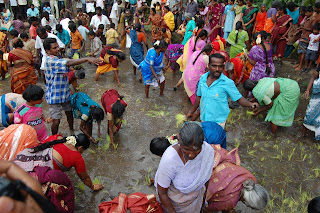 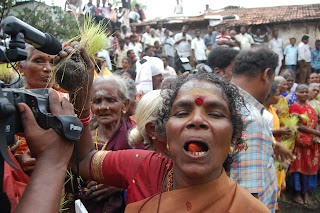 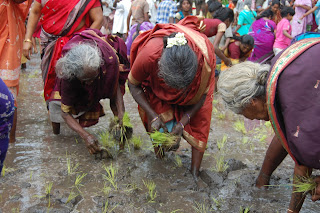 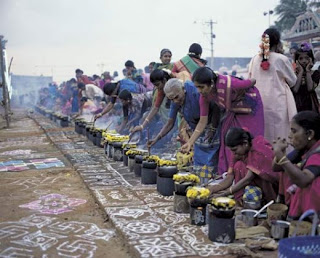 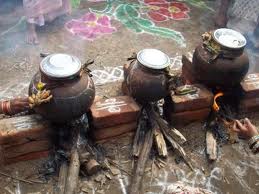 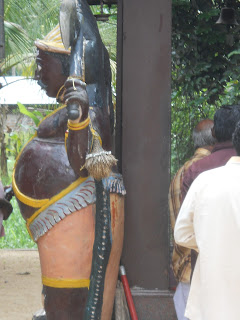 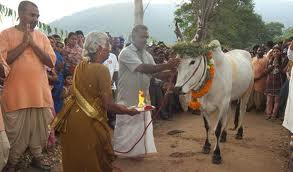 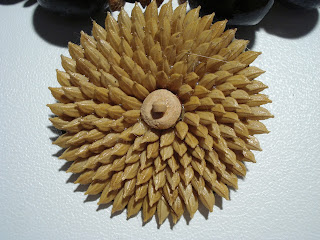 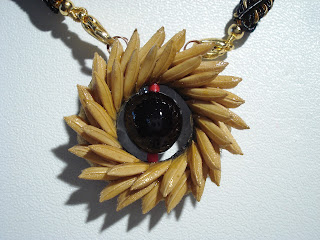 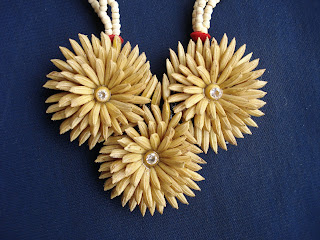 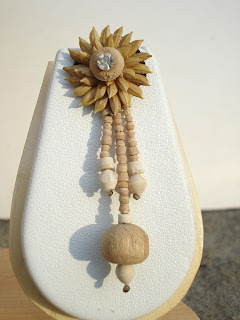 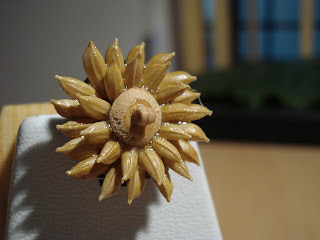 i would like to introduce myself surya.s landscape architect.im currently doing research on sangam landscape.i want to disscuss with u regarding sangam people food culture .

I am publishing a book entitled Nanchinad: harbinger of rice and plough culture in the ancient world. I am taking the image of ponner poottal from your blog, with your kind permission.
thanking you
Dr V Sankaran Nair
vsankarannair@gmail.com